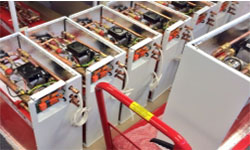 Sunamp, a Scottish manufacturer of heat batteries for domestic energy storage, including models designed to link with PV systems, has started serial production of its units from a base in the UK.

Company boss Andrew Bissell and his team revealed at the Solar Energy UK show yesterday that Sunamp’s assembly partner, Bay Solutions, is putting together Sunamp products at a rate of 100 cells a week, equating to 50 units.

While the company undoubtedly wants to go for the wider commercial market long term, the initial focus of this output will be for a community-run and privately-invested programme to assess the long-term impact on fuel poverty of using the heat storage in combination with PV on the roofs of at least 1,000 social housing developments.

After initial production began about a month ago, Bissell said, the output from Bay Solutions is at 250kWh weekly, with each heat cell holding 2.5kWh of thermal energy and each battery unit of two cells holding 5kWh. Bay Solutions had until now been making electronics boards for the batteries’ control systems but now taken on the role of producing the finished “white box” product.

The initial line of batteries will be the Sunamp PV model. As might be expected from the name, these are intended for self-consumption of PV by households. The cells use Phase Change Materials that melt and release heat when needed – melting at around 58 degrees centigrade. Sunamp claims that in contrast to a normal domestic PV system, which exports a large portion of its generated power, the heat battery allows the system user to consume as much as 80% of the PV power as converted heat energy.

Bissell has long been vocal in pointing out that in Britain, more energy is expended “in the thermal domain” as in the electrical, and claims the devices, which also work to make already installed combi boilers more efficient, can save a household up to £271 a year over the 20 year life of the PV system.

While some companies are keeping their cards close to their chests and reluctant to reveal prices ahead of full-scale launch in the UK, Sunamp has quoted prices of around £1,700 per 5kWh system – although prices exclude VAT, due to the variable rate of the tax according to whether the property it is going into is new build (0% rate), an energy efficient property (5% rate) or otherwise (20% full VAT rate). As a benchmark, Tesla’s Powerwall electrical storage battery will be sold to installers at US$3,500 (£2,270) for a 10kWh system.

The first units to roll off the production line will be used in the Eastheat, programme to “prove the real impact on fuel poverty” of combining PV and energy storage in the Edinburgh region. It will be part funded by the Scottish government through the Local Energy Challenge Fund, put together by Scottish community renewable energy advisory group Local Energy Scotland.

Sunamp has partnered with two housing associations, East Lothian Housing Association and Castle Rock Edinvar. There are four other consortia in the Eastheat programme, with Sunamp and the others winning the projects through a competitive process against over 100 other candidates.

Interestingly, the project was developed before the proposal of drastic feed-in tariff (FiT) cuts in the UK. As a result of the announced cuts, the plan has been revised to maximise the number of installations from an initially planned 1,000 rooftop PV systems and 650 Sunamp heat batteries. An estimated 3,000 PV installations will be carried out instead by Eastheat’s installation partner Edison Energy. “…Due to the planned changes to the feed-in tariff the challenge was accepted to maximise the installations within the housing association properties wherever it was feasible,” Bissell told Solar Power Portal.

As the programme was enlarged, Bissell said, a Chinese investor – which Edison Energy preferred not to name at this stage – stepped in with a £10 million contribution to the project’s costs. This could also mean a ramping up of the expected 650 Sunamp system deployments.

Bissell said he personally did not know any further details of the Chinese investor.

However, he said that it was “obviously…a big investment and obviously the feed-in tariff for PV is key to it happening”.