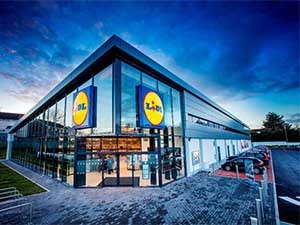 With the first concept store in mainland Britain also now open in Rushden, Northamptonshire, retailer intends to refit 150 of the group’s 629 stores over the next three or four years.

The state-of-the-art facility in Banbridge, Co Down will, according to the German supermarket, “ensure a greater focus on energy efficiency with a reduction of around 20%-30% on standard electricity costs.”

The glazing elements were fixed in a double format mullion configuration to meet aesthetic requirements, and were required to seamlessly integrate with other non-fire rated screens.

The “green” credentials of the store extend inwards from the external glazed elements with, for example, warmth from refrigerators being recycled.

Lidi opened its first supermarket in the UK in 1994, and intends to open a further 40 stores every year until it reaches a target of 1,500 stores.

“We were delighted to supply to this new supermarket, because it underlines how glass and glazing systems can play an important part in energy conservation – both by letting heat from the sun in, and preventing it escaping,” said Lee Coates, Wrightstyle’s technical director.

“Importantly, while our systems can effectively and cost-efficiently help to regulate internal temperatures inside large offices and retail facilities, they do so without compromising on their primary safety functions,” he said.

Wrightstyle has supplied to a number of major retail projects in the UK and internationally, including Ocean Terminal in Edinburgh, home to the Royal Yacht Britannia, and Langham Place, Hong Kong.